Tributosaurus is the Jurassic beast of multiple musical faces, and every month, the beast morphs into a different rock group. The finest musicians from Chicagoland join the core group to sit in…to sing and play songs they’ve wanted to cover all their lives.
View previous events 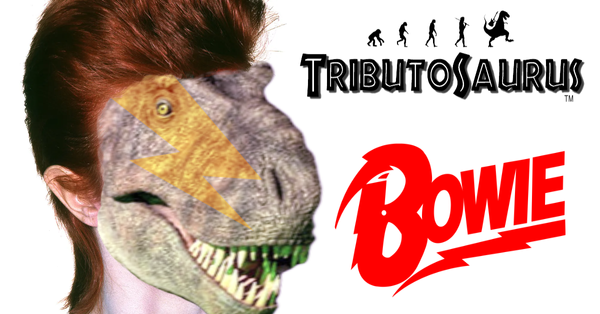 Tributosaurus gets to play 2 shows on Halloween weekend!  And when we gather with you for a triumphant return to the western suburbs, it has to feature the music of someone special.

Join us on Halloween weekend, Friday 10/29 and Saturday 10/30, when Tributosaurus becomes David Bowie at Fitzgerald's in Berwyn.  We're thrilled to be back at Fitz; under new ownership that honors and respects the legacy of the venerable roadhouse.  If you’re up for it, Fitzgeralds wants YOU to become Bowie too! There will be a David Bowie costume contest, and the best costume wins a $100 dollar gift card & a complimentary stay at FITZGERALDS Sleepover Castle! 😱☠️

We're pumped, because there's no one better to freak out with than the interstellar shape shifter himself.  Bowie was the foremost purveyor of Glam, an inventor of Plastic Soul, a dabbler in Electronica, and of course a Spider from Mars.  We’ll touch on Ziggy, the Berlin Trilogy, the 80’s superstardom, and some of his all-star collaborations.  You’ll hear the songs you know and love, and a few deep cuts we'll mix in as well.  These shows will be an eclectic party, filled with the sound and vision that’s been a part of your musical world for decades.

A ceaseless creator, and a worldwide artistic icon, David Bowie was many things.  Tributosaurus will try to be as many of them as possible on Halloween weekend at Fitzgerald's.

For years, Tributosaurus has celebrated the night before Thanksgiving with one of our very favorite shows - The Boss.  Last year, we were unable to continue this tradition, for obvious reasons, but it’s time to bring it back. We are absolutely giddy with excitement to return this huge extravaganza to you, this year at the Theater on the Lake.

Springsteen is famous for his live shows, and Tributosaurus will deliver that energy and joy to the crowd on Wednesday, November 24th. We will be visiting the raw early E Street jams, and the more thoughtful introspective Bruce of later years, and everything in between - and there will be some new wrinkles in there for all of you who have come year in and year out to see us do it in the past.

This is a show for the dyed-in-the-wool Springsteen acolyte, as well as the casual fan - all of what makes him an American Icon is here, and it all rocks.  Horns, strings, multiple guitars and keys, and a few special guests to boot - all in a large and airy state of the art venue that is one of the finest in the city - what could be better? This show always sells out, so don’t wait too long…